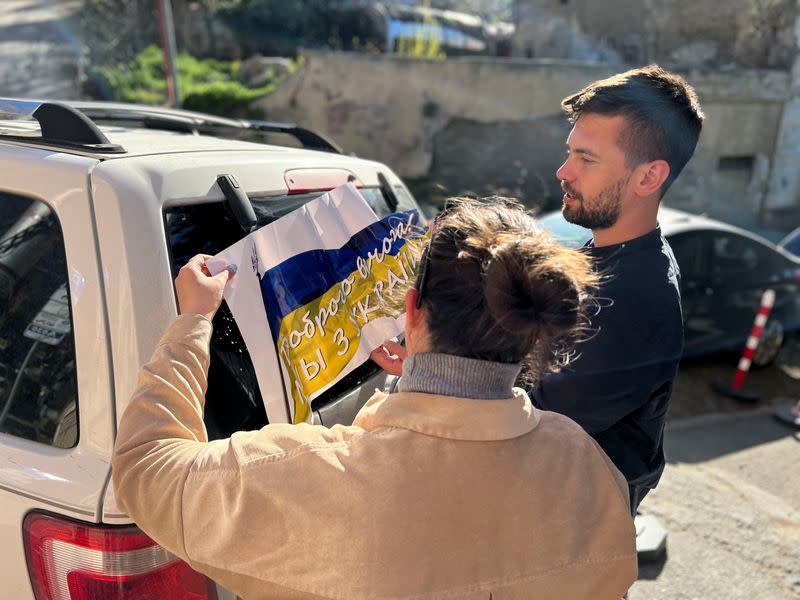 TBILISI (Reuters) – Ukrainian refugees who reluctantly find themselves under Moscow’s rule are receiving help from an unlikely quarter: networks of Russian volunteers helping those displaced by the war to leave Russia.

When Bogdan Goncharov, his wife and 7-year-old daughter fled the shelling in their hometown of Mariupol in mid-March, they ended up in Russian-controlled territory in south eastern Ukraine. Fearful of being transported thousands of kilometers away after hearing other refugees were sent to Siberia, Goncharov said he contacted a Russian volunteer who arranged transport for them across Russia to the Estonian border.

“It’s a miracle we got out,” said 26-year-old Goncharov, who worked as a builder before the war and is now starting a new life in Sweden. “It’s thanks to the volunteers.”

For uprooted Ukrainians like Goncharov who do not want to remain in Russia or Russian-controlled territory, the volunteers provide advice on travel routes as well as help with money, transport and accommodation along the way, according to nine people who are involved in the loose-knit networks or have received help from them.

Many of the networks are run by Russians or people of Russian origin, according to four of the people, who are involved in the networks. Three of them said while most of the volunteers are based abroad, there are also some Russian nationals who are still in their homeland, and many of those work clandestinely to avoid the attention of Russian authorities.

It represents one of the ways that ordinary Russians who are upset by the devastation caused by the war can express how they feel at a time when domestic laws effectively restrict the ability of people in Russia to openly criticize the military, several individuals interviewed by Reuters said .

There is no law in Russia that specifically bans people from helping Ukrainians leave the country. There is legislation related to non-governmental organizations (NGOs) that gives the government the power to deny registration if it deems they are engaged in activities harmful to Russian interests. Russian law also requires NGOs that receive foreign funding and are considered to carry out political activities to submit to additional scrutiny.

“We all have this constant feeling of guilt,” said 20-year-old Maria Belkina, a Russian native living in Georgia who runs a group that she says has helped around 300 Ukrainians leave Russia. The group, called Volunteers Tbilisi, also provides humanitarian aid for Ukrainian refugees in Georgia. “Many people from Russia are writing and asking: ‘In what way can I help?'” she said.

Reuters spoke to two other volunteer groups that each said they had helped a thousand or more Ukrainians leave Russia since the conflict began; the news agency was not able to independently confirm the figures. All three groups said many of those they have helped resettle have come from Mariupol, a strategic port city in eastern Ukraine that has endured among the most destructive sieges of the war.

The Kremlin and Russian emergencies ministry, which deals with refugees, did not respond to requests for comment on the treatment of Ukrainian refugees, the volunteer networks helping them leave the country and how the Russian authorities view their activities.

The Ukrainian government did not respond to a request for comment on the work of the volunteers.

The activities of the volunteers carry risk. Russians who openly disagree with the war have faced fines and prosecutions, according to interviews and an organization that tracks police action against political activists.

One Russian woman who had helped dozens of Ukrainians leave Russia via the border with Estonia stopped after she was summoned by police for questioning, according to two fellow volunteers. They said she was held for several hours without access to a lawyer, adding they did not know what police questioned her about.

The woman, Irina Gurskaya, has not been charged according to one of the people, Svetlana Vodolazskaya, who coordinates the network she volunteered with. That group, called “Rubikus,” has helped about 1,500 Ukrainians leave Russia, said Vodolazskaya, a Russian native who lives in Britain.

Gurskaya did not respond to a request for comment, nor did the Kremlin. The police in the Penza region where she lives could not be reached for comment.

Russia invaded Ukraine on Feb. 24 in what the Kremlin calls a “special military operation” to demilitarize its neighbor. Moscow denies targeting civilians and has said it is offering humanitarian aid to Ukrainians.

Russian President Vladimir Putin said on April 26 his country had helped up to 140,000 people leave Mariupol. “They can go wherever they want: “Some want to go to Russia, some to Ukraine,” Putin said. “We are not detaining them. We are providing them with all possible help and support. ”

Of the more than 13 million Ukrainians that have left their country or been displaced within Ukraine since the conflict started, some 740,000 had crossed into Russia as of May 6, according to the United Nations.

The volunteer group that helped Goncharov, called “Helping to Leave,” said it had provided practical assistance to about 1,000 people to leave Russia. The Volunteers Tbilisi group said it coordinates with “Helping to Leave.”

“Helping to Leave” is operated by Russians and Russian-speakers based abroad who also have around 100 people inside Russia helping them that are not members of the organization, according to the group. They put Ukrainians up in their homes “so that they can gather themselves a bit and then we evacuate them from Russia,” said co-founder Naturiko Miminoshvili, who is based in Tbilisi.

The group arranges accommodation, information on travel routes and assistance booking trains and buses, said Miminoshvili. She added the group also advises people on their rights.

The group has logged instances where Russian officials pressured people to travel to locations where they do not want to go or told them that they are not allowed to leave the officially-provided accommodation, according to Miminoshvili and a volunteer, who asked to be identified only by her first name, Anna, citing security concerns. They did not specify how many instances the group had logged.

Anna said most of the requests from Ukrainians for help have come from fleeing people Mariupol, a once-bustling port with a pre-war population of 400,000. It has experienced heavy bombardment since the early days of the conflict, with civilians suffering shortages of drinking water and food. Many of the city residents have ended up in Russia or Russian-controlled territory. Several who spoke to Reuters said that was the least dangerous way out.

The Georgian government did not respond to questions about whether it was aware of the activity of volunteers based within its borders.

Goncharov said he and his family decided to leave Mariupol on March 15, after munitions landed near their apartment building. Electricity and water supplies had already been cut off, he said.

Hitching a ride out of the city with two other families, Goncharov said they passed through checkpoints manned by Russian soldiers. He and his family stayed for six days in a hotel in Berdiansk, a Ukrainian city controlled by Russian forces, then headed to the Russian-annexed peninsula of Crimea, according to Goncharov.

Goncharov said officials billeted the family in a guest house in the Crimean resort of Yalta and offered help with their immigration status as well as offering a grant of 10,000 rubles (about $ 145). He added that officials also told him he did not have the right to travel anywhere else without permission, unless he registered for official refugee status.

The guest house, called “Smena,” could not be reached for comment.

Goncharov was also worried that he and his family could be sent to the remote Sakha region in Siberia, as he’d heard other Ukrainians had from a fellow evacuee. He later discovered that the day after he left Yalta, about 50 Ukrainians were taken from there to Taimyr, a peninsula on the Arctic Ocean, according to Goncharov, who said he heard it from people who were among those transported and that he knew from Mariupol .

Reuters was not able to verify his accounts of Ukrainians being transported. The Moscow-backed administration in Crimea referred questions about that and the other elements of Goncharov’s account of his time in Yalta to the emergencies ministry in Moscow. The ministry did not respond to requests for comment, nor did the regional administrations covering Sakha and Taimyr.

While in Yalta, Goncharov said he contacted an acquaintance in Germany, who put him in touch with Anna, the volunteer from the “Helping to Leave” group. She instructed him to get to Rostov, in southern Russia, according to Goncharov.

Once there, volunteers arranged for him and his family to be picked up by a private bus that took them to the border with Estonia, he said. There, Russian officials asked Goncharov about any ties to Ukrainian security forces or law enforcement before allowing him to enter Estonia, more than three weeks after leaving Mariupol, he said.

Anna confirmed that she had helped Goncharov leave Russia. The Estonian government did not respond to a request for comment about Goncharov’s account and the activities of the volunteers. Between Feb. 24 and May 10, 19,000 Ukrainians entered Estonia from Russia, according to the Estonian police and border guards.

In some instances, help for Ukrainian refugees is ad hoc. Darya Kiriyenkova, a dentist in St. Petersburg who is not linked to the networks, said she took a week off work in April to volunteer at an official reception center for Ukrainian refugees in Taganrog, a city in southwest Russia. She said she’d felt shock at the war and wanted to help those affected.

While at the reception center, she said she also helped buy tickets and make travel arrangements for some refugees wanting to leave Russia. “There were lots of people like that,” said Kiriyenkova, adding that they headed mainly to Estonia, Poland and Germany. She added some refugees traveledled onward to stay with relatives in Russia or went to Russian destinations allocated by officials.

Belkina, who runs the Volunteers Tbilisi group, was born and raised in Russia – a country she said she loved but finds it “sad to see how it is now.” In the Georgian capital of Tbilisi, she and her Ukrainian partner have been providing food and accommodation for newly-arrived Ukrainian refugees, using the hotel owned by her parents as a hub.

They “are like dead souls,” Belkina said of the newly-arrived refugees. “When you look at them you see that they are suffering at the hands of your country.”